It only took me 29 years to figure out my problem. And a debilitating one it was! From September – December, every year, it’s the season of Pumpkin everything. And I didn’t like pumpkin. Survival was a struggle. It was real, ya’ll. So good thing this year, I was able to self-diagnose and resolve my issue. It’s not with pumpkin. I actually like pumpkin (well, in certain recipes). My issue is with pumpkin ‘spice’. Which actually makes me feel kind of dumb, because it’s well documented that I abhor cinnamon, and a lot of other nutty flavors, like nutmeg and allspice, so it is only logical that I would loathe pumpkin ‘spice’.

Now that I’ve gotten that all squared away, I’ve been going a little pumpkin crazy, well with pumpkin purée, not the pie filling, well because the ‘spice’. And these soft and savory rolls are by far my favorite thing I’ve discovered yet. The pumpkin adds extra vitamins and fiber, without altering the doughy, yeasty bread taste in anyway. So basically, they’re more healthy than regular rolls, and they taste amazing, and because they have pumpkin in them they’re pretty much mandatory at Thanksgiving and any other Autumn activity. 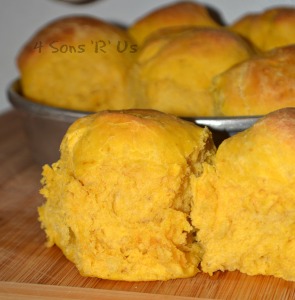 recipe adapted from My Sequined Life

Hi! I’m Meaghan. Welcome to my virtual kitchen & craft corner. Pull up a chair, stay awhile and follow along with us and our 4 sons. Can I get you a glass of wine? Some coffee? Pretzels or cheese sticks? While I can’t actually give you these thing online, I can show you how to make them… on a budget!
View all posts by 4 Sons 'R' Us »
← Healthy Peanut Butter Apple Dip
Sous Chef Sunday: BOO-NANAS →