On the heels of Thanksgiving ( and our carbohydrate-induced post coma ) we needed something light, but still packing that flavor punch. We couldn’t stomach more than one course (shoot one whole meal seemed a struggle) so soup seemed to fit the bill perfectly.

And not just any soup, but pizza soup, a soup that’s a soup but still really not a soup since it encapsulates one of our most beloved dishes (and all its flavors) in one dish, without all those dastardly carbs. Who needs to hibernate in a carb coma two days in a row? Am I right, or am I right?

We’ve found most people frown at the name, but after one taste they get it. It really does taste just like pizza, but better for you. And who can’t get behind that?! 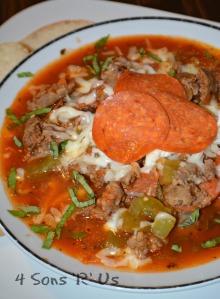 Hi! I’m Meaghan. Welcome to my virtual kitchen & craft corner. Pull up a chair, stay awhile and follow along with us and our 4 sons. Can I get you a glass of wine? Some coffee? Pretzels or cheese sticks? While I can’t actually give you these thing online, I can show you how to make them… on a budget!
View all posts by 4 Sons 'R' Us »
← Cajun Spiced Roasted Pumpkin Seeds
Crockpot Honey Garlic Chicken →