One Sunday after church, when the hubs and I were dating, he decided to take me out to lunch. At the time, church and lunch were in the county where our parents all lived, which was much more rural than the subburbs I was used to. There weren’t any delivery services. and only a handful of nice retaraunts to choose from. And by nice I mean not the terrible pizza place that only gets away with charging so much because it’s the only thing out here, or the obligatory McDonalds with its tiny menu. So we settled on Chinese. And it was damn good Chinese, worth every expensive penny. To this day, what I ended up ordering is still my favorite dish. Sadly though, it’s getting harder and harder for me to find, especially in those beloved suburbs we’ve since moved back to. You’d think more restaurants, more honey chicken, right? Well, wrong. I don’t know what it is. Maybe it’s that not enough people realize just how delicious it really is. But it is fantastic! 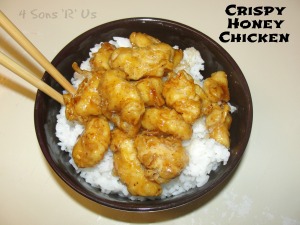 It’s so sad this much deliciousness hasn’t been contagious and hasn’t already swept the Chinese restaurant nation, but there’s always hope for the future! Even though the trend hasn’t caught on, the fever sure swept through our house and the recipe has stayed strong and withstood the test of time. If you haven’t discovered the deliciousness yet, well here you go. And if you’re like us and are having a hard time scratching the honey chicken itch then here’s a perfectly easy at home version without the restaurant pricing. 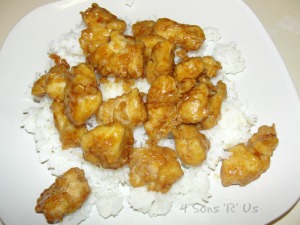 1. Heat a medium to large skillet over medium heat, and then add in the honey, soy sauce, sesame oil, red pepper flakes and apple cider vinegar. Whisk or stir the sauce ingredients together and bring it to a boil. In a separate, small bowl, stir together the cornstarch and water. Once the sauce is boiling, while continuing to stir, slowly add in the cornstarch mixture. Bring the mixture back to a boil and then quickly turn down to a low simmer for 10 minutes. Remove the sauce from the heat and allow it to sit for a minute to finish thickening. You only want to thicken a little bit, as too much would make it hard to toss and evenly coat the chicken.
2. Meanwhile, heat the oil in a dutch oven, or other designated pot for frying, over medium high heat. In a shallow dish, mix the flour and spices together evenly. Toss the chicken in the spiced flour, then the buttermilk, and then back into the flour. Once the oil is nice and hot cook the chicken, turning occasionally until golden on the outside and cooked through, about 3-5 minutes. Drain the fried chicken on paper towels and then toss in the sauce and serve over sticky rice.

Hi! I’m Meaghan. Welcome to my virtual kitchen & craft corner. Pull up a chair, stay awhile and follow along with us and our 4 sons. Can I get you a glass of wine? Some coffee? Pretzels or cheese sticks? While I can’t actually give you these thing online, I can show you how to make them… on a budget!
View all posts by 4 Sons 'R' Us »
← 7 Layer Cornbread ‘Casserole’
Pesto Potatoes →