Apple Pie. It’s a regular old American dessert. In fact it’s the sweetheart of American desserts. While it’s tried and true and a classic hit on dessert tables everywhere, it’s not all that easy to make. And it’s time consuming. And ain’t nobody got time fo that. At least not most days.  But then I got to thinking, and it occurred to me that cupcakes, especially ones that come from a box like the one sitting in my pantry, however are hardly any work at all AND they taste great. 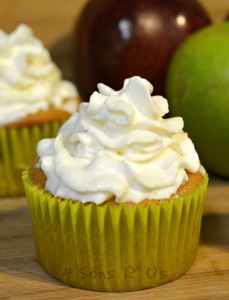 And a beautiful old meets new, brand new spin on the old fashioned stand by emerged. Apple Pie CUPCAKES. Genius, right? From the outside you’d never guess it was anything other than an average cupcake, but one bite reveals it’s moist, cinnamon infused cake and surprise apple pie filling in the center. 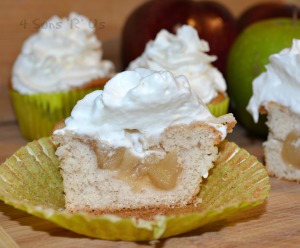 All the same flavors, in a snap, with a lot less fuss and a lot less mess.  Top em with a hearty dollop of whipped cream or really splurge and throw on a decadent scoop of your favorite rich & creamy vanilla ice cream and dig in. 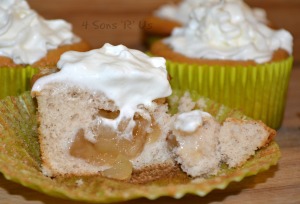 1. Preheat the oven to 350 degrees and line a cupcake pan with cupcake liners.
2. Make cupcake batter according to the package directions. Add in the cinnamon, mixing to evenly incorporate.
3. Chop apple pie filling into bite sized pieces.
4. Add 3 tbsp of cakes batter to each cupcake liner. Place one heaping tablespoon of pie filling on top of the batter in each cupcake liner.
5. Bake 18-20 minutes.
6. Top with whipped cream or ice cream.

Posted in Recipes and tagged dessert. Bookmark the permalink.

Hi! I’m Meaghan. Welcome to my virtual kitchen & craft corner. Pull up a chair, stay awhile and follow along with us and our 4 sons. Can I get you a glass of wine? Some coffee? Pretzels or cheese sticks? While I can’t actually give you these thing online, I can show you how to make them… on a budget!
View all posts by 4 Sons 'R' Us »
← One Pot Sausage Jambalaya
Asian Chicken Wraps →