Both ginger and apple cider vinegar have been widely noted for helping aide weight loss and digestion. Trying to eliminate soda from your diet? Just trying to find a tasty, healthy poolside option? Either way, give this ‘mocktail’ a try. Detox and alkalize your body, all while staying hydrated and healthy this summer! Instead of pure drinking water, use seltzer water for a fun, fizzy effect.  It’s refreshing taste will have you sighing and saying, ‘Ahhhh’ after your first sip. Happy guzzling. 🙂

Update: It’s been brought to my attention that this drink is essentially a ginger switchel. After a look into this, I was even more impressed with it as it’s benefits just keep on piling up. The exact source of the switchel isn’t known, but some speculate it came up to the Colonies from the Carribbean. What is known is that in Colonial days, with no modern conveniences like central air, or even ice cubes, a day spent out working in the field or on the farm could be grueling in the summer heat. To stay hydrated, they drank a quenching beverage that functioned much like modern sports drinks: switchel, also called switzel or haymaker’s punch. It contained water, a sweetener—either molasses, maple syrup, honey or brown sugar—ginger, and cider vinegar. All the ingredients (except water) happen to be sources of potassium—an electrolyte. Molasses is especially high in potassium. You could easily swap in some molasses for the stevia if you wanted to go old school. Also, another fun fact, it’s the bite of the ginger that resembles the taste of alcohol and apparently this was another reason the switchel became so popular among the colonial poor during the growing temperance movement of the 19th century. 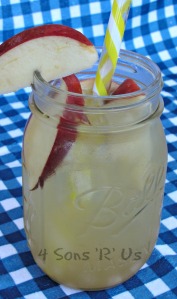 enough ice to fill a quart jar to where the ring screws on
1 teaspoon ginger
4 teaspoons sugarless sugar (stevia)
2-3 tablespoon. apple cider vinegar
enough pure drinking water to fill the quart jar after filling with everything else

I mostly added in the apples for aesthetic appeal, buuut they do significantly enhance the flavor. So if apple is your thing you’ll definitely want to throw in a few slices.

Posted in Recipes and tagged beverages, drinks. Bookmark the permalink.

Hi! I’m Meaghan. Welcome to my virtual kitchen & craft corner. Pull up a chair, stay awhile and follow along with us and our 4 sons. Can I get you a glass of wine? Some coffee? Pretzels or cheese sticks? While I can’t actually give you these thing online, I can show you how to make them… on a budget!
View all posts by 4 Sons 'R' Us »
← Buffalo Chicken Shepherd’s Pie
Homemade Caesar Salad Dressing →