Although it only requires three ingredients (bread, cheese, and butter), grilled cheese is one of the most popular comfort foods in the world. The Ancient Romans were the first civilization to make a cooked bread and cheese sandwich, but many cultures have invented their own take on this ‘classic’ dish. In France, people enjoy Croque Monsieur (a grilled ham and cheese sandwich) while in Switzerland it is customary to melt the cheese and toast the bread separately before combining them. The American grilled cheese sandwich emerged in the 1920s when inexpensive cheese and affordable sliced bread became available. It is now a staple in cafés, diners, and school cafeterias across the country.

Despite this noteworthy past, and it’s longevity, today, it’s a sad world for the grilled cheese sandwich. Somewhere along the way it has been demoted from a classic comfort food to the dismal realm of the kid’s menu; thus, making it ‘socially’ off limits to the older-than-15-crowd. And when you’re an adult who just wants some melted cheddar between two buttery, toasty slices of bread…that’s a sad, sad thing. Being that I have the four sons, I jsut don’t care. Social norms be damned. If I want a grilled cheese, I’m having grilled cheese. Even if the waitress looks at me funny when I place an order for not 4, but 5, kid meals.

Still, being that April is ‘grilled cheese month’ and all, and I saw that waitresses’ questioning arched eyebrow,  I thought it was time for a revival. An upgrade, if you will, to make it worthy of a place in the world of socially acceptable adult fare. I know I’ve mentioned this in several posts before. I will never be to old for grilled cheese! At it’s most basic, it’s totally awesome. At it’s fanciest adaptation? It’s still freakin’ awesome!!

This is a far cry from your typical grilled cheese sandwich. Kick things up a notch with the salsa and chiles. If you happen to have a babysitter, enjoy it out on your patio with a margarita to make it REALLY good! 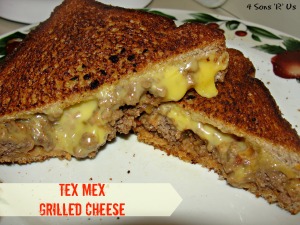 1. Brown ground beef in medium sized skillet. Drain fat. Mix in taco seasoning and prepare according to package directions. Add salsa & green chiles.
2. Butter one side of each slice of bread. Cut Velveeta into 6 pieces.
3. In a large skillet place two pieces of bread, buttered side down. Top each piece of bread with one slice of Velveeta. On top of Velveeta spoon 1/6 of hamburger mixture. Place another piece of bread on top of beef with the buttered side up.
4. Cook over medium heat until bread is golden brown. Flip sandwich and repeat on other side. Repeat until all sandwiches have been made.

Hi! I’m Meaghan. Welcome to my virtual kitchen & craft corner. Pull up a chair, stay awhile and follow along with us and our 4 sons. Can I get you a glass of wine? Some coffee? Pretzels or cheese sticks? While I can’t actually give you these thing online, I can show you how to make them… on a budget!
View all posts by 4 Sons 'R' Us »
← Sous Chef Sunday: Cinnamon Roll Waffles with Cream Cheese Glaze
Cheddar Bacon Ranch Pull-Apart Bread →