Sons 1 & 3 have birthdays within a week of each other. Since the dates are so close together they typically have a combined celebration where all of their family and friends can get together at once. We almost always do a cake and coordinating cupcakes. This year, they opted for a combination of comic books (Son # 1 collects them) and some of their favorite Super Heroes (is any boy ever too old for them?). These were the results and they thought they were absolutely fantastic! 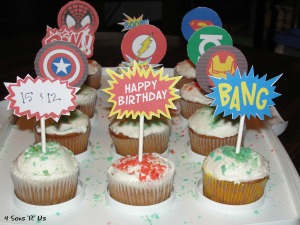 Holy Cupcakes, Batman! I loved, as did Sons 1 & 3, how these turned out! They were a huge hit. The cupcake toppers are from 3 separate printables. The first one, representing some of the boys favorite iconic comic book superheros was from Less Than Perfect Life of Bliss. Batman was present, but isn’t pictured. The Happy Birthday, Bang, Pow, and blank printables I found at Let’s Panic. Finally, the smaller ‘Boom’ & ‘Pow’ came from Simply Designing with Ashley. I just cut out the printed images and hot glued them to lollipop sticks. Last minute I decided to add some Pop Rocks as ‘sprinkles’ so the cupcakes matched their comic book captions.

A few months ago I had found Thor’s hammer on clearance at Target for less than $5. I purchased it immediately with this cake in mind. I used chocolate frosting to cover the cake. I gently pressed the hammer into the cake at an angle creating an indention. I removed the hammer and had my husband cut a rectangle into the indention, in the center, where the hammer would rest to make it stable and ensure it would remain upright. I then stuck the hammer on top and sprinkled crushed oreos around for ‘dirt’.

While the older boys wanted things kept simple party-wise, both loved their cake and cupcakes. Seeing their eyes widen when I presented them with their birthday treats made me feel pretty darn ‘super’ myself. They can just call me Wonder Woman. Just Kidding.

I love my little ‘Supers’.

Hi! I’m Meaghan. Welcome to my virtual kitchen & craft corner. Pull up a chair, stay awhile and follow along with us and our 4 sons. Can I get you a glass of wine? Some coffee? Pretzels or cheese sticks? While I can’t actually give you these thing online, I can show you how to make them… on a budget!
View all posts by 4 Sons 'R' Us »
← Ranch BLT Pasta Salad
{Easy} Homemade Baby Wipes →